Completely heaterless for up to 80% energy savings.

Heater PID control which is representative in production fields that demand precision air processing, starting with semiconductor and FPD production processes, represents a large shortcoming when it comes to power consumption. Due to increasing miniaturization, the demand for higher precision is also increasing, and ORION is responding with its development of completely heaterless air dryers that provide high precision control combined with reduced power consumption. ORION has responded to our customers' needs with refrigerant reheating control, a renewed technology that offers energy savings incomparable with previous heater PID control systems, and wide ranging setting capabilities formerly impossible to achieve.

What is Heat Pump Balance® Control?

Heat Pump Balance® control is air conditioning from simultaneous heating and cooling operations in a single air conditioning unit, and the high-level controlled balancing of those operations. In other words, unlike a common air conditioner that moves heat either from the inside of a room to the outside, or from the outside to the inside, we've developed a bleeding edge control technology that avoids normally wasted heat movement that includes advanced control technology yielding energy savings along with high accuracy temperature control operation. 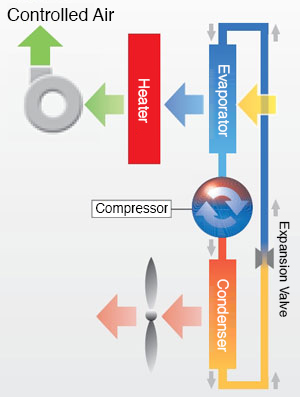 While under continuous sustained cooling operation, air is controlled by passing it through a heater operating at an equal or greater capacity than the level of cooling. In other words, compared with Heat Pump Balance® control, the losses are clear, and approximately 70% of energy is wasted when the heater is operating. 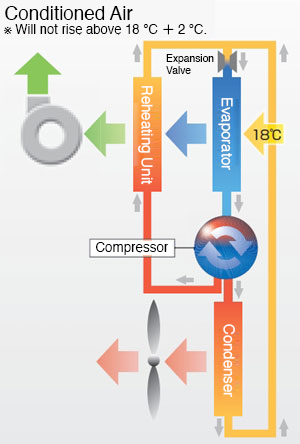 A second condenser (reheating unit) is installed, and the heat output from it is utilized as air from the evaporator is passed through it in order to re-heat the air. Even if 100% of refrigerant gas is circulated through the reheating side, there would be no change in the circulation load of the evaporator and the cooling capacity would be the same, therefore, since the heating power is only equal to that of the compressor power, the air temperature can only be controlled to 2 ℃ above the intake ambient air temperature.
Under Heat Pump Balance® control, refrigerant is concentrated on the heating circulation side so that air can be controlled to temperatures to 7 ℃ over the intake temperature, thus offering a flexible response to changes in environment such as those due to seasonal changes.

Automatic control of compressor speed in response to changes in load.

Even greater energy savings are realized by combining compressor speed control during periods of low load, with Heat Pump Balance® control. We offer a level of control that is impossible to achieve with constant-speed compressors. 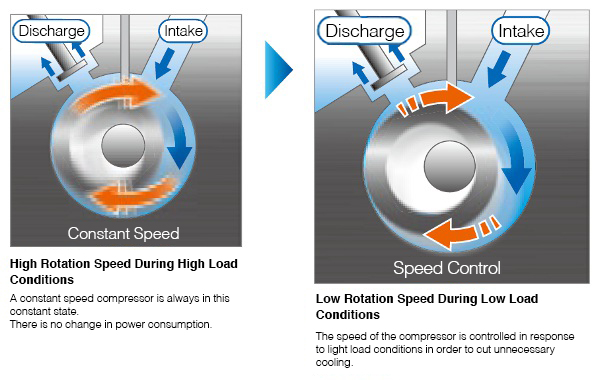 A freeze-prevention circuit is not needed.

We have achieved completely heaterless humidification. 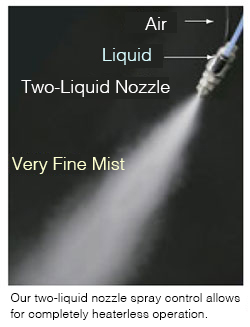 The method of humidification uses a two-liquid nozzle mist humidification system that is a completely heaterless, energy saving solution. Humidity control precision to ±1% is possible.